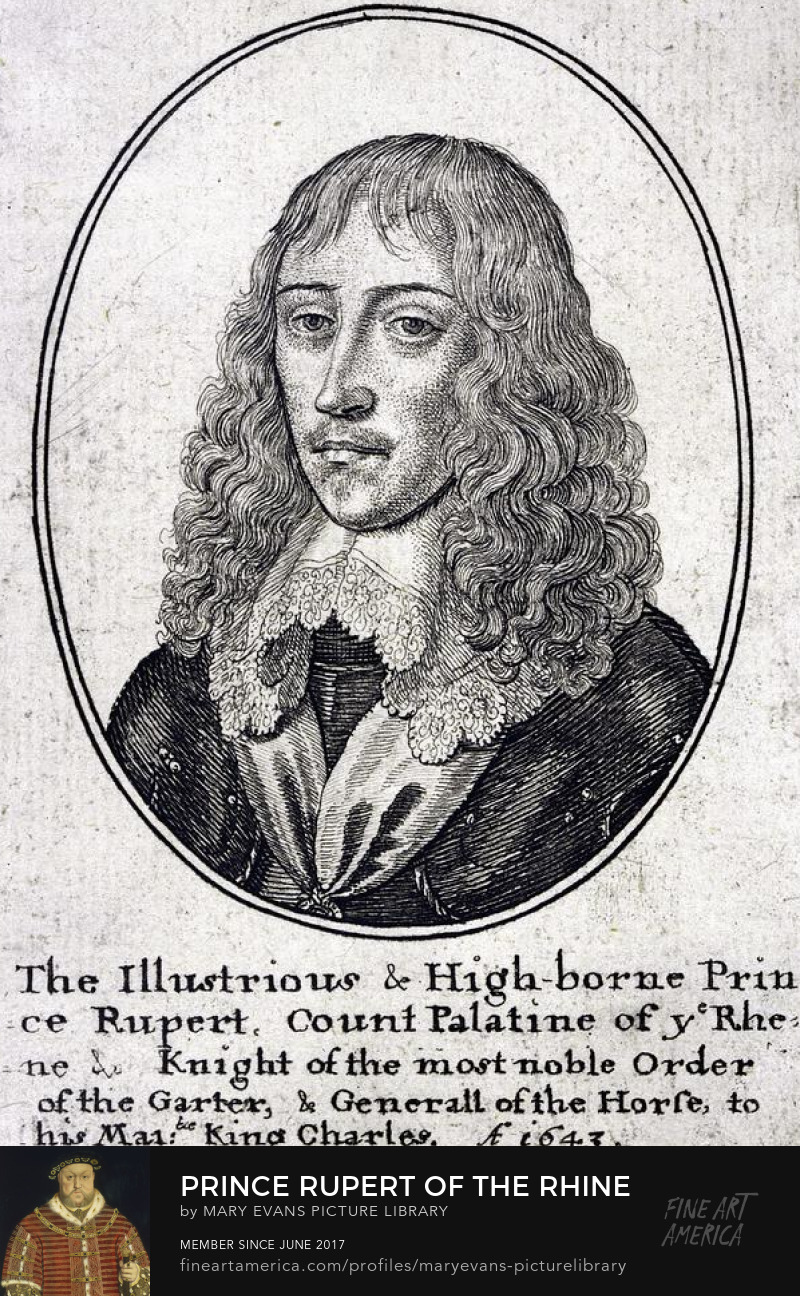 Prince Rupert of the Rhine, Duke of Cumberland, KG, PC, FRS was born in 1619 in Prague, the son of Frederick V of the Palatinate and Elizabeth, the youngest daughter of James VI of Scotland and I of England.  He was a nephew of King Charles I of England.   In 1642, at the age of 23, he was appointed commander of the Royalist cavalry.  He died in England in 1682. 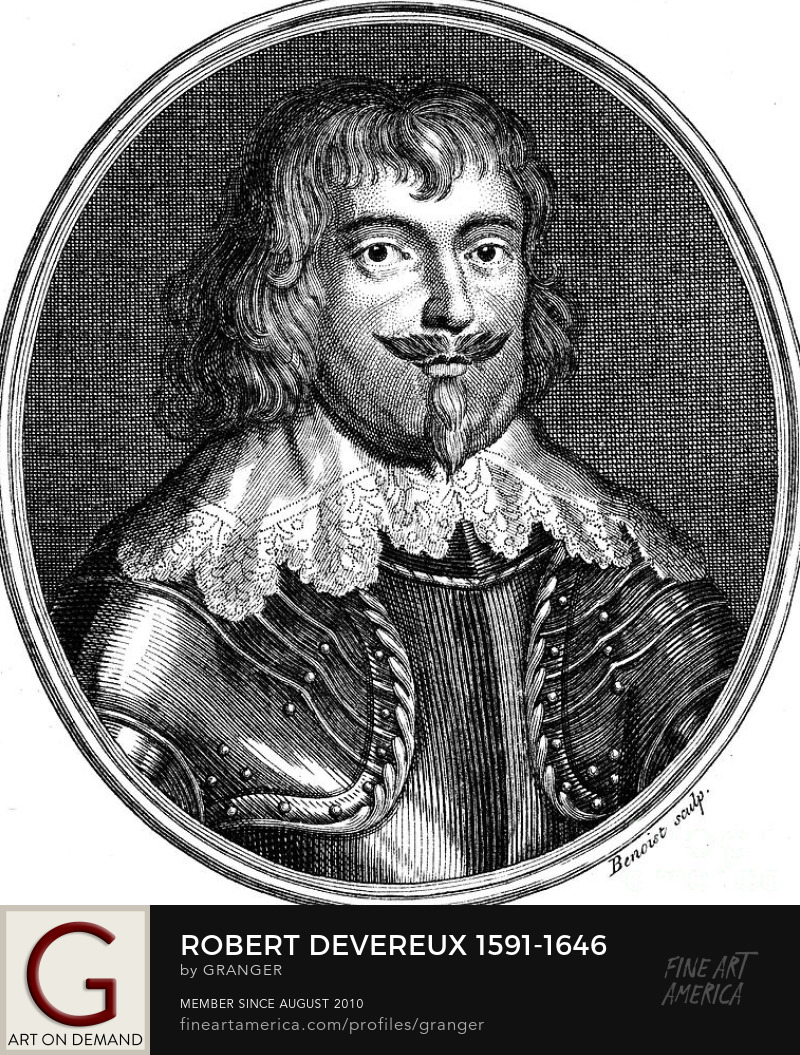 Robert Devereux, KB, PC was born in January 1591 in London, the son and heir of Robert Devereux, 2nd Earl of Essex and his wife Frances Walsingham, the daughter of Sir Francis Walsingham, Elizabeth I’s spymaster.  He was educated at Eton College and attended Merton College, Oxford where he was created a MA in 1605.  He was a close friend of Henry Stuart, Prince of Wales.

In 1620 he started what was to be an undistinguished military career, when he joined Horace Vere’s expedition to defend the Palatine.  In 1621 he served with Prince Maurice of Nassuau.  In August 1622 he took part in the battle of Fleurus with Prince Maurice of Nassau. In 1624 he commanded a regiment in the unsuccessful campaign to relieve the siege of Breda.   In 1625, under Sir Edward Cecil, he commanded a squadron as vice-admiral and as colonel a foot regiment in the failed English expedition to Cadiz.

Following a period of little distinguished activity in the 1630s, Essex, who had been made Knight of the Bath in 1638, served in the army of King Charles I during the first Scottish Bishops’ War in 1639 as Lieutenant-General of the army in the North of England.   However he was denied a command in the second, which took place in 1640. This pushed him further into the arms of the growing number of the King’s opponents in Parliament.

Robert Devereux’s opposition to the Stuart monarchy as a leader of the Country party in the House of Lords was established in the 1620s along with the Earls of Oxford, Southampton, Warwick, Lords Say and Spencer. During one exchange the animosity of King Charles was evident when he said: “I fear thee not, Essex, if thou wert as well beloved as thy father, and hadst 40,000 men at thy heels.”

As the unprecedented prospect of a military confrontation between the King and Parliament grew, on 4 July 1642 Parliament voted to create a Committee of Safety consisting of ten Members of the House of Commons and five peers, of which Essex was one alongside the Earl of Northumberland, the Earl of Pembroke, the Earl of Holland and Viscount Saye and Sele. Pym, John Hampden and Denzil Holles were the leading members of the committee from the Commons. This committee was supposed to act as a bridge between Members of Parliament and the armed forces supporting them in the field. At this point these armies primarily consisted of regional defence militias and city trained bands who were sympathetic to the Parliamentary cause.

Then on 12 July Parliament voted to raise an army of its own. As one of the few English nobles with any military experience, Essex was chosen to lead it. The Parliamentary ordinance which was passed proclaimed Essex to be:

“Captain-General and Chief Commander of the Army appointed to be raised, and of all other Forces of the Kingdom…and that he the said Earl shall have and enjoy all Power, Titles, Preheminence, Authority, Jurisdiction and Liberties, incident and belonging to the said Office of Captain-General, throughout the whole Kingdom of England and Dominion of Wales, in as large and ample a Manner as any other General of an Army in this Kingdom hath lawfully used exercised, and enjoyed.”

The Earl of Essex died in September 1646 without an heir.   After hunting in Windsor Forest he had a stroke on the 10th and died in London, at Essex House, four days later, aged fifty-five. The earldom died with him.   His death led to a large display of mourning.   Parliament contributed £5,000 to the expenses of his funeral and he was buried in Westminster Abbey.  For the occasion the chancel of the Abbey was draped in black from floor to ceiling and a funeral effigy of the earl dressed in scarlet breeches, a military buff-coat and Parliamentary robes was erected beneath a catafalque designed by Inigo Jones. This was left standing after the ceremony until a poor farmer from Dorset, said to have been a former royalist soldier, hacked it down on the grounds that an angel had told him to do so. The effigy was restored but Charles II ordered that it be taken down during the Restoration, although – unlike most Puritans interred in the Abbey during the Civil War and Commonwealth – his body was allowed to remain buried.

John Hampden was born about June 1595, probably in London the eldest son of William and Elizabeth (nee Cromwell).   In 1619 he married Elizabeth Symeon at St Mary’s Church, Pyrton, at the time the Symeons lived at Pyrton Manor.  Prior to the death of Elizabeth in 1631 they had nine children, 7 survived into adulthood.  He later married Letitia Knollys but they had no children.

He was an English landowner and politician, whose opposition to arbitrary taxes imposed by the King made him a national figure.  When he stood against the imposition of the Ship Money tax in the 1630’s he became known as “Patriae Pater – the Father of the People”.  An ally to John Pym and cousin to Oliver Cromwell.  He was among the five members of parliament whose attempted arrest in January 1642 sparked the First English Civil War.

After the war began in August 1642 he raised a regiment of foot.  He first mustered his troops in Chalgrove on the 15 August with Denzil Holler Regiment of Horse. They arrested Lord Dormer at Ascott House for causing a Commission of Array.

At Edgehill in October 1642 Hampden’s regiment guarded the artillery & baggage Traynes.  His eldest son was in Denzil Holles Regiment and may have been killed defending Chenies House or driven into the Thames at the battle of Brentford.  After the battle of Brentford he helped rally the troops for the defence of London.  However, his main contribution was holding the Parliamentary factions together over the first winter.  He also helped to prepare for a long war by initiating negotiations with the Scots that led to the Solemn League and Convenant in August 1643.

At the start of the 1643 campaign Hampden was second-in-command to the Earl of Essex,  whose lack of aggression was already cause for concern.   He died on 24 June 1643 of wounds received at the battle of Chalgrove, which had taken place on the 18th.  He is reputed to have died in the Greyhound Inn, Thame in a room above the entrance, today this is the lane that leads to the Waitrose supermarket.

A reputation for honest, principled and patriotic opposition to arbitrary rule made him a popular figure in New England.  Both Franklin and Adams are among those who referenced him to justify their cause prior to the American Revolution in 1774.  In 1765 James Otis under the pseudonym “John Hampden” delivered the statement ‘no taxation without representation’, and this is from where the famous quotation, given after John Hampden’s 1637 Ship Money Trial, arises.

In 1841 his statue was erected in the Palace of Westminster, to  represent the Parlimentary cause.

Edward Hyde was a Member of Parliament in the Short and Long Parliaments and kept a journal of events from 1641 – 1646.  Hyde renounced his seat in Parliament and in May 1642 and became Privy Counsellor to King Charles.  Hyde recorded events of the first English Civil War in his private journal as they happened.

Hyde received information from Col. John Hurry of the loose quartering of Essex’s troops and that a pay convoy could be in the area of Thame on the 18th June. Hurry related that Sir Samuel Luke came with fresh troops and supplies and was quartered at Chinnor. With the King’s permission at 4pm on Saturday 17th June Prince Rupert crossed Magdalen Bridge with 2,000 men to raid Essex’s furtherest outpost.

At 2pm on the 18th June the King, Hyde and the population lined Oxford High Street to greet Prince Rupert in a triumphal parade. The senior Parliamentarian officers captured at Chalgrove hours earlier were probably on first name terms at Court with the King and Edward Hyde. They related the saga of how 800 officers came to be fighting as troopers at the battle of Chalgrove.   Click here to see a Copy and Transcript of Edward Hydes Manuscript

John Gunter was a Captain of a troop of horse in the earl of Essex’s Army from 15 July 1642, which he retained command of until his death at the Battle of Chalgrove.
Major in Essex’s own regiment of foot in the earl of Essex’s Army from or by 1642;  however, whilst there are pay warrants issued to him as captain of his troop until just before his death, and he was always referred to as major after mid-Aug., his last payment as major of Essex’s regiment of foot was in Nov. 1642 (for one month from 26 Nov.). He also seems to have had some staff duties in responding to pay warrants.
In June 1643 Gunter led his own and two other troops in following Prince Rupert’s reconnaissance mission in Oxfordshire; joined by other officers and men, the pursuit culminated in the parliamentarian defeat Chalgrove (18 June), at which Gunter was killed, ‘a man of much courage and fidelitie, his bravery engaging him and his small Partie too farre’ .

Back to main battle page.

All Pictures and text copyright CLHG or its members.